“Inconvenient Truths” of the Trump “Impeachment Trial” Omitted by the Media. Propaganda or Ingnorance? 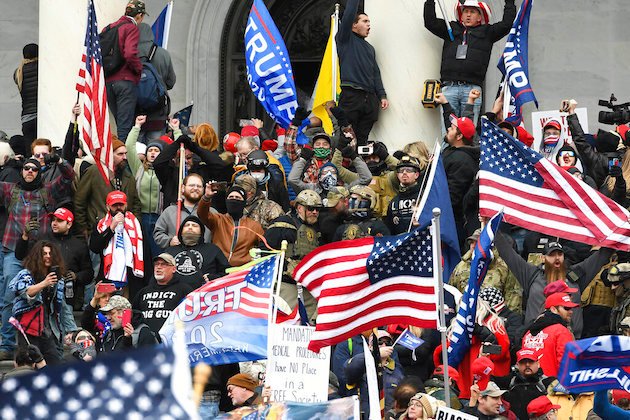 “If Democrats did not have “Double Standards”, they wouldn’t have any Standards at all!”

This an often quoted but accurate trite cliche’ these days.  Nothing proves this point more than the current omission of facts during the partisan “Impeachment Trial” of former President Donald J. Trump.

Not withstanding the farce of an impeachment of a private citizen in the senate where there is no constitutional authority or jurisdiction (we won’t go into the nuances here but click here for a full explanation of Article II, Section 4), the Democrats have the audacity to preside over the “trial” as judge and jury with Senator Leahy acting as lead in this Soviet Style “show trial”.

The Danger to our Country in “Trying a Private Citizen” for the purposes of preventing them from running for office the future.

There are many politicians who have articulated out loud that a main driver for this trial is the sole purpose of preventing Donald Trump from running for office again.  Here is the fall-out from such diabolical actions:

Here is just a snippet of what he said THREATENING justices on the Supreme Court:

“I want to tell you, Gorsuch, I want to tell you, Kavanaugh, you have released the whirlwind, and you will pay the price. You won’t know what hit you if you go forward with these awful decisions,” Schumer threatened the two most recently confirmed justices, Neil Gorsuch and Brett Kavanaugh.

“If Democrats did not have “Double Standards”, they wouldn’t have any Standards at all!”

Two other examples of outrageous public statements come from Kamala Harris and Maxine Waters.  In the heat of massive rioting from Antifa and BLM members in dozens of cities, Kamala Harris supported them and urged them on in a famous video with Stephen Colbert as seen below:

As Rand Paul recently said about the forthcoming Impeachment Trial, “It’ll just now be all theater, but it really is a double standard when you think about it. Kamala Harris has offered to pay people’s bail who tried to burn down the courthouse and were rioting in the cities. She offered to pay the bail. Is that inciting people to violence when you’re willing to pay people to get out of jail after they committed violence? Should Kamala Harris be impeached? No, the answer is no,” he said.  He left out the fact that a group Harris supported actually bailed out rioters and looters who then went on to commit more crimes.

Maxine Waters said the following and reiterated it on the campaign stump and speeches dozens of times, “Let’s make sure we show up wherever we have to show up. And if you see anybody from that Cabinet in a restaurant, in a department store, at a gasoline station, you get out and you create a crowd. And you push back on them. And you tell them they’re not welcome anymore, anywhere.”

Now we believe in the First Amendment and as outrageous as many of the these statements are, they are also political theater and silly hyperbole.  None of these folks should be impeached but we merely point out the hypocrisy of the “double-standard” under the current witch hunt rules the Democrats operate under in a blood thirsty lust for power.

Was it a Spontaneous Riot Incited by then President Trump or a Planned Attack over weeks?  It can’t be both!

With all this being said, do your own investigation and come to a conclusion that makes sense for you.  The MSM partisan hacks are going to try and manipulate the information with half-truths and whole lies.  Fake News is alive and well and this is why we are here to expose the nonsense!