Is CNN a Propaganda Arm for the Democratic National Committee? We Report! 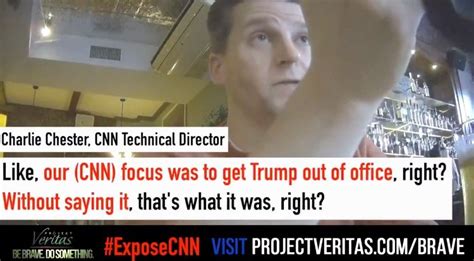 Project Veritas unveiled a video Tuesday the group says is of a CNN staffer describing how the network worked to show then-Presidential candidate Joe Biden in a favorable light during the 2020 presidential campaign.

The undercover video captured a man, the self-proclaimed conservative watchdog group identified as CNN Technical Director Charlie Chester, saying he decided to work with the network because it focused on removing former President Donald Trump. Chester also credited CNN as a critical tool to electing Biden.

“Look what we did, we [CNN] got Trump out. I am 100% going to say it, and I 100% believe that if it wasn’t for CNN, I don’t know that Trump would have got voted out. I came to CNN because I wanted to be a part of that,” the man said in one portion of the video.

Chester was speaking to someone off-camera at undisclosed locations. He was targeted through the dating app Tinder, according to Mediate, citing a source close to CNN. The unidentified Project Veritas employee went on a total of five dates with Chester, the Tuesday Mediate report noted.

Chester reportedly does not have any say in the channel’s content direction.

Sinclair Broadcast Group has been unable to confirm the identity of Chester, and CNN has not yet responded to our requests for comment or provided confirmation of the man’s employment with the 24-hour news channel. We will update this article when we get a response.

Chester described some of CNN’s reportage on Trump during the campaign as “propaganda.” He said CNN invited medical experts to undermine public confidence in Trump’s health.

“[Trump’s] hand was shaking or whatever, I think. We brought in so many medical people to tell a story that was all speculation that he was neurologically damaged, and he was losing it. He’s unfit to, you know, whatever. We were creating a story there that we didn’t know anything about. That’s what, I think that’s propaganda.” Chester said in one part of the video.

President Joe Biden talks to reporters during the first news conference of his presidency in the East Room of the White House on March 25, 2021 in Washington, DC. (Photo by Chip Somodevilla/Getty Images)

The man also said that Americans are feeling fatigued from the constant drumbeat on the pandemic. CNN will likely shift its content toward climate change, according to Chester.

“As a technical director, Charlie Chester is fully involved in the day-to-day operations of CNN’s Newsroom,” O’Keefe said in a statement to Mediaite.

“He is witness to decisions being made, and who they are coming from. He has full access to the culture within the network and explains — on video — how company-wide directives are being implemented,” O’Keefe added.

In another more damning clip it shows CNN directly involved in promoting Biden’s candidacy by showing him to be jogging and healthy when there were legitimate issues around mental acuity.

Asked by the ​sleuth if he and CNN were concerned with Joe Biden’s health during the election, Chester said the network had that in mind.​

“Showing him jogging is obviously deflection of his age and they’re [CNN] trying to make it like, ‘Oh, I’m healthy,’” Chester said.

“We would always show shots of him [Biden] jogging and that [he’s] healthy, you know, and him in aviator shades. Like you paint him as a young geriatric​,” Chester replied.

A source close to CNN said Project Veritas targeted Chester through the dating app Tinder because his profile mentioned he worked at CNN, according to Mediaite.

The Project Veritas employee, who was not identified and claimed to be a nurse, went on five dates wearing a wire, including the final one at a coffee shop in Chester’s neighborhood. It’s unclear when the dates took place.

Chester told his “date” he would be fine with it if Biden died, because he thought Vice President Kamala Harris is “f—ing real.”

“I had so many arguments about, like — my dad would be like, ‘You’re, you know, you’re voting in Kamala Harris because he’s going to die in the presidency,” Chester told the woman. “And I’m like, ‘He’s not going to f—ing die.’ But I’m OK with that. I’m OK with that. She probably could be a b—h in, like, a board meeting, and you’d hate her as a boss, but she’s f—ing real, and better than what we got regardless.”

Chester was asked if CNN covered Biden tripping as he walked up the stairs.