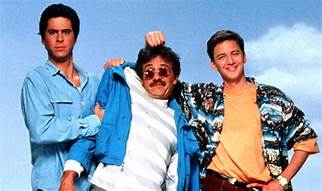 The Democrat DC establishment has moved behind the scenes to rig the election to install Joe Biden, literally the “Weekend at Bernie’s” candidate (ok, not literally!).  For those who don’t know the movie from 1989, two post pubescent boys keep their dead boss “alive” by holding him up and trotting the corpse around while they continued to party in his house in the Hampton’s to get girls.  Total Hilarity and Hijinx ensues!(Not that funny…)  Though just a movie, the coronation of Joe Biden is the real life version of this movie, the DC Masters have produced a new movie, “Weekend @ Biden’s”.  It’s not that funny either!

Are the Democrats really worried about Bernie Sanders or worried that the voters think “Bernie Sanders Communist” will dominate the headlines or Trump campaign ads?  Is really a terrible thing that someone who believes what they say is actually a threat to the political process and those who vote for him?  Of course they are afraid of Bernie, he is not prone to phony proclamations of empathy and good-will on the one hand while the other hand is enriching themselves and their “K” street supporters and donors.

One could be forgiven for getting nauseous when watching Klobochar, Buttigieg, Bloomberg and O’Rourke fall over themselves to “endorse” the zombie Biden when they all know how fragile his mental faculties are at the moment and only prone to degenerate.  It is almost like pulling wings off a fly to put Biden up to the task of months of treacherous traveling, debates, glad-handing and non-sense speeches.  Just watch Biden in gaffe after gaffe in the last couple of months, they are not just mild misstatements but indications of serious mental decline.   America is watching this candidate fit more for a skilled-nursing-facility than president of the US.

The real Bernie must come out swinging and take Biden and the establishment head on so we can have an honest election where two candidates who truly believe their rhetoric actually make a case for the American people to consider.  This is not an endorsement of any particular candidate but an indictment of a broken political system.